Our Elms – Taking care of an old friend

Welcome to our first article for our arbor news! This month we are taking a look at the Elm Leaf Beetle.

Elms have been an important part of the Melbourne landscape since their introduction in the 19th century as one of the first trees to be planted in our city. We often take for granted the beauty of these trees. A stroll along any of the avenues of honour of mature Elms we have, will remind us of their heritage and that they are some of the most significant in the world.

It is estimated that there are approximately 70,000 Elms in Victoria alone. Some have lived past 150 years of age, with the potential to live another 100 years. Two of the oldest English Elms are at the The Royal Botanical Garden named ‘Arthur’s Elms’. They were planted by the first Curator John Arthur in 1846. 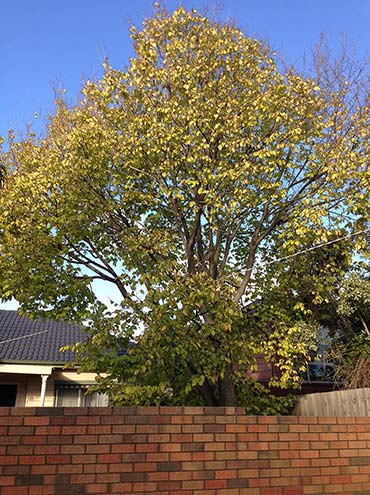 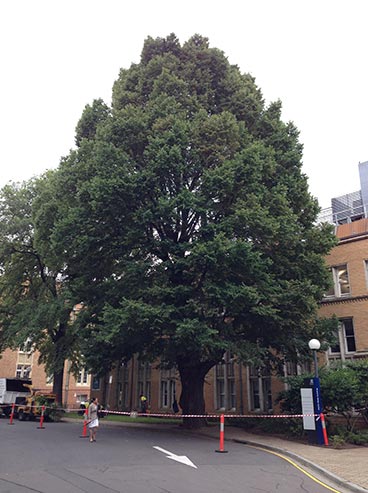 Examples of Elms we manage

Unfortunately other parts of the world have not been so lucky with their Elms. Dutch Elm Disease (DED) has killed millions of trees, beginning in France in 1918, then Holland, England, Europe, North America and more recently New Zealand. DED is a fungus which produces a toxin that blocks the tree’s vascular system. It is the elm bark beetle that spreads the fungus spores onto the tree and into the soil. The branches wilt, and leaves become yellow and eventually the roots die, starved of nutrients.

For now the threat of DED is not eminent and luckily this disease has not yet been found in Australia. The main concern for our Elms is the Elm Leaf Beetle (ELB). The Elm Leaf Beetle was discovered in a Bayside area not far from Melbourne around 1989 and is becoming increasingly more widespread. It has the potential to cause severe defoliation during the summer months which can weaken mature trees and possibly kill the tree. Elms that suffer from repeat attack are also more susceptible to other pests and disease. 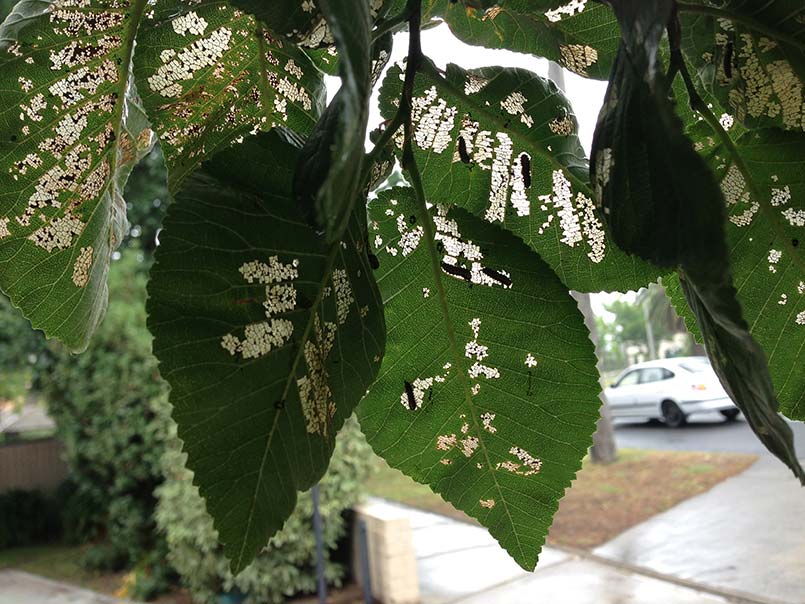 To control the spread of Elm Leaf Beetle to the Elms we need to look at the cycle in which they grow. Over the winter months the beetles hibernate emerging in the spring where they begin to eat small holes in the leaves. By November the beetle lays tiny eggs which hatch after 7 -10 days producing small larvae. The larvae feed on the leaves leaving only the veins of the leaf behind. By December they have grown up to 12mm and begin to make their way down the trunk where they turn into pupae. 1-2 weeks later new beetles emerge and the cycle continues. This life cycle can happen 2-3 times a year depending on weather conditions causing great stress to our Elms. 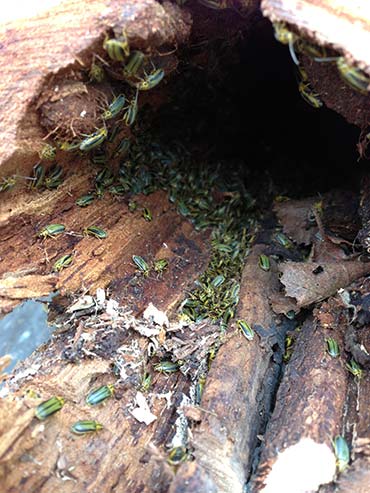 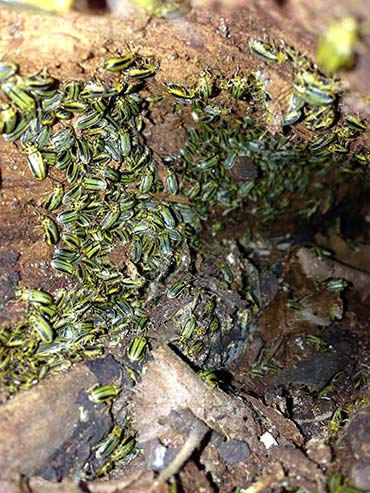 Elm Leaf Beetle over winter in a tree hollow

The best way to care for an Elm is to put a management plan in place. This includes treatment during the months of September and October every 2 years. Here at Assured Tree Care we have extensive experience, and equipment to undertake modern plant health treatments. We can provide soil and stem injections which through the careful use of systemic insecticides, control Elm Leaf Beetle numbers from spreading and in-turn improve the health of your tree.

Our motto is to ‘Promote longevity among trees’. We love the role they play in our environment and now more than ever they are an important part of the urban landscape. As more and more developments go up, more pressure is placed on existing trees and the available space in which they grow. This along with the threat of pests like the Elm Leaf Beetle makes it hard for our trees and in particular our friend the Elm. Therefore taking care of our trees and giving them the best chance is what matters, we need them just as much as they need us!

Because trees matter!
Until next month
The Assured Tree Care Team