Spending its time on the mainland over winter in Victorian forests and along Australia’s eastern coastline, the Swift Parrot is now heading back to Tasmania. Flying over the strait from August, spring time in Tasmania is the only place they like to breed. Many years ago this was a fine place to nest, searching out Blue Gums and the hollow of a trunk. These days however, tell a very different story as this colourful little bird fights extinction.

Earlier in July this year, a group of illegal wood collectors were discovered cutting down thousands of trees in a patch of forest at Buckland in Tasmania. The crown land used as a breeding ground for Swift Parrot had been repeatedly targeted by car loads of men and chain saws. It may seem trivial to those absent-mindedly cutting these trees for firewood but for those involved in the plight to save the Swift Parrot, this has come as a devastation. 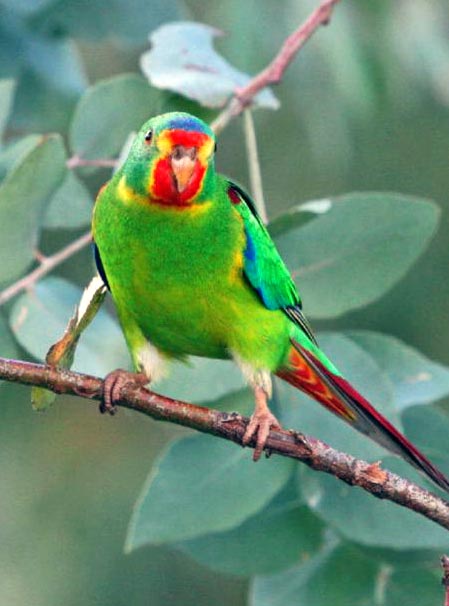 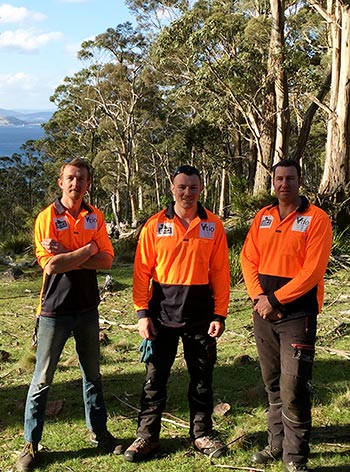 Conservation biologist Dr Dejan Stojanovic from the Australian National University, was the one to discover the trees and nests had been destroyed. He has been researching the Swift Parrot for a number of years, dedicated to creating habitats to keep them from extinction. The site had been one of the most important in Tasmania with 18 nest trees being monitored since 2010 and now only 8 remain. Illegal firewood cutting, logging of old growth forests and clearing farm lands has meant a that a lack of hollow trees available to these birds has severely restricted their breeding opportunities. With the loss of habitats it is also more likely that predators such as sugar gliders can kill the female parrot and her eggs. As there is an estimate of around 2000 left in existence the Swift Parrot is listed as critically endangered.

Dr Stojanovic discussed their plight on ABC’s radio National earlier this year, and it was then Andrew McKernan, the secretary of the Victorian Tree Industry Organisation (VTIO), heard him and thought something must be done. McKernan was put in contact with Stojanovic and through the VTIO a team of 33 arborists from Victoria, Sydney and Tasmania joined together to volunteer their time and resources to help the beautiful bird have a better chance at survival. 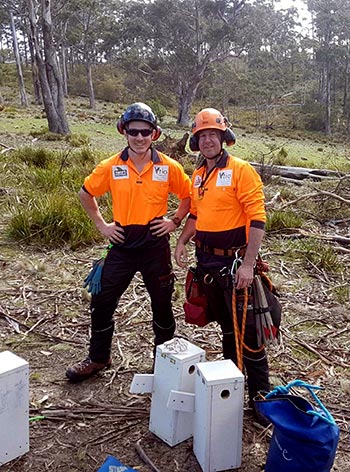 Troy and Russell with nesting boxes 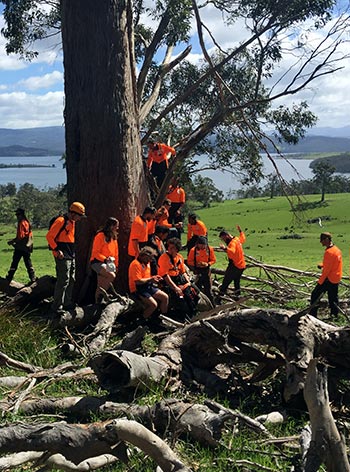 Some of the voluteer arborists

So as active members of the VTIO, our crew were some of the arborists who volunteered their time to save this endangered bird. Russell Shepherd, who is current Vice President, Troy Taylor and Rob Shaw headed down to Tasmania over the weekend of the 8th and 9th of October to help with habitat creation for the Swift Parrot. With the work ute loaded the guys took the Spirit of Tasmania overnight to Devonport. Once there it was a car and ferry ride to another breading site located on Bruny Island.

Access has been restricted in Buckland due to the ongoing police investigation, so Bruny Island served as another perfect spot to create habitats. The birds are quite fussy about where they breed so the size of the hollows and construction needs to be quite precise. Peppermint trees on the island were a great tree to climb the 10-15m needed to create the hollows. They were close enough to the Blue Gums, which are currently flowering and providing an abundance of food for the parrots. Chainsaws may seem as an unlikely saviour for these birds, but as it can take up to 120 years for a hollow to form in a tree, the man made hollows are the next best things. 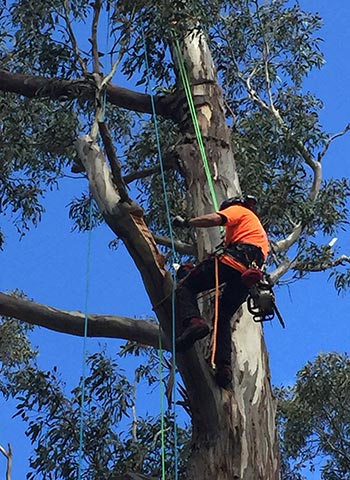 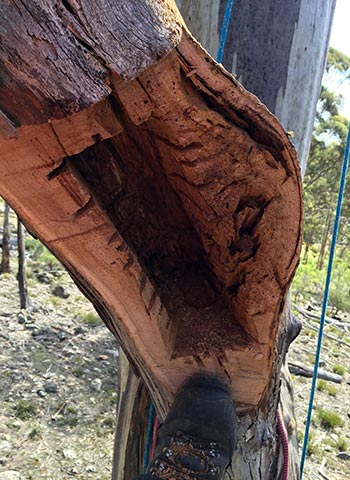 Russell working on a carving

There are 2 ways in which the group helped create new habitats for the birds. One was to cut a face plate from the tree, hollow out the tree then cover it back over with the face plate. There also needs to be a small hole made approximately 50 mm wide on the other side for the birds to enter. This allows the parrot to get into the hole without predators such as the sugar glider entering and taking the eggs. Essentially they are mimicking what would take years for a hollow to form and hopefully will last at least 50 years or longer.

The other way is the purpose built nesting boxes. About 300 have been built by the Green Army to help house the birds. These are then attached to the tree. There were some installed earlier this year and they have already proved to be successful. Although not as robust as the hollow carvings they are still proving to help with the breeding process. 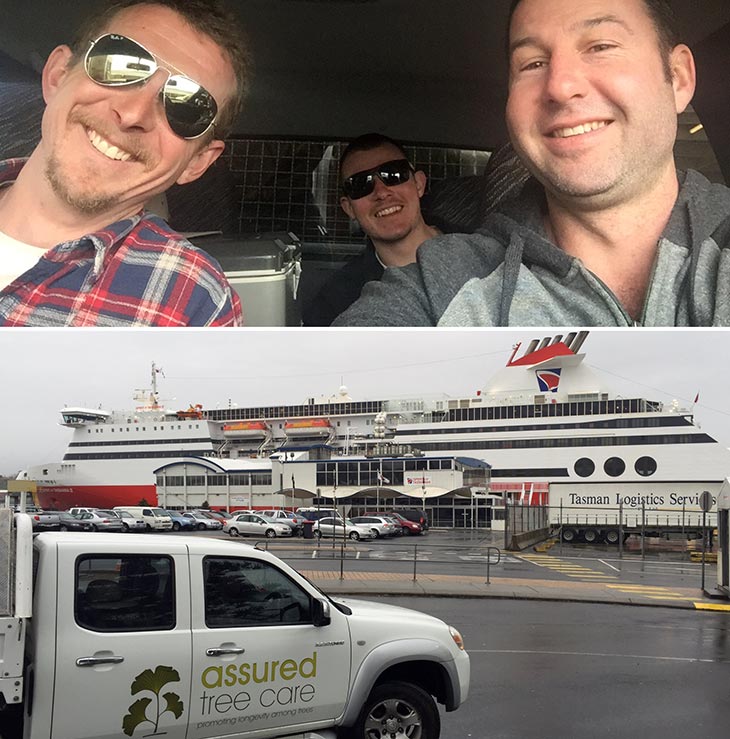 The guys heading home after a great weekend

A few days after the team returned we had word that the Swift Parrots had in-fact arrived on the island and began searching out nests to breed. Great news for Stojanovic and his team! This will all be closely monitored by them to see how the Parrots adjust, but they do warn this is really only a band aid solution for now. Although they are buying them some much needed time, the real issue is that something should be done to preserve mature Tasmanian forests so that nature can provide for these birds.

There were a lot of great people who gave up not only their time on the island to build habitats but also others who took photos and videos of the weekend. To get a lovely overview and vibe of this expericence please have a look at the link below put together by Tom the Tree Wizard.

The media also gave this some coverage running articles leading up to and at the time of the volunteers helping on the island so head over to abc.net.au for their coverage of the weekend and full transcript.

It really was an amazing experience for our team to be a part of. They met some great fellow arborists, they had a few good laughs and made the best of an ATC road trip! Using skills and equipment for something other than general tree work was a rewarding opportunity, especially when its helping a bird that is really fighting to stay around and grace us with its colour and beauty. Giving back is something that makes everyone feel good!

Because trees (and saving wildlife) matters!
Until next month
The Assured Tree Care Team